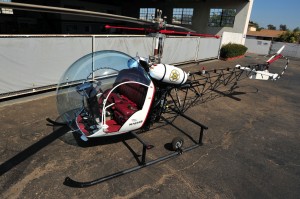 B47HA was invited Oct 3, 2012 by the Los Angeles County Sheriff Dept. to attend the unveiling of its new Eurocopter AS332L1 Super Puma Rescue Aircraft. B47HA Vice President Danny Rodriguez flew in with his B47G dressed up as an mid-fifties Sheriff Search and Rescue helicopter. Also responding were our fellow B47HA members Carol Simpson and Doug Kerr in their beautiful B47G2.They flew all the way in from the San Francisco Bay area, Hayward, Ca. Their Bell 47G2 was the very FIRST helicopter that L.A. County purchased for the Sheriff Dept. Many people, including Sheriff Lee Baca attended this great event. The BELL 47G Helicopter played very integral part in developing their early rotary wing search and rescue program,which started their AERO BUREAU. They continued to use B47G models until the late 70’s. A special thanks to SGT Morrie Zager of their AERO BUREAU and CAPT Duran for their interest and hospitality. We Congratulate them and wish them great success!

President Rhodes stated, “Danny and I, in coordination with the Los Angeles Sheriff Dept. have been planning this event for some time. I knew Danny – would make us proud. Again, we are carrying out the mission to honor the 47 and the people who have made the 47 a success.