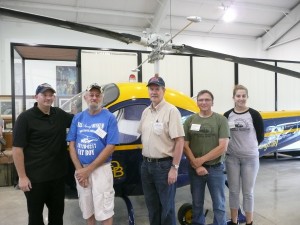 The weather on Aug 27th for “Rotors Over Mentone” unfortunately did not pan out for pilots who wanted to fly in that morning. However, Johnny

Walker and his American Huey 369 crew were able to get their aircraft to the Bell Aircraft Museum just before the skies darkened and let loose with heavy rain, lightening, and fog.  Despite the weather, the museum’s guest speaker, Robert Ruotolo, was able to generate enough enthusiasm to make it worth while for those who drove to the museum.  Robert’s talk was about his time spent with Arthur Young and the origins of the Bell 47 helicopter.  Robert was age 23 at the time when Arthur went over his helicopter rotor design and discussed his miniature flying invention with Robert.  Young’s invention got the interest of Larry Bell back in 1941 which led to the development of three manned prototypes (Model 30) at Bell Aircraft Corp and later to the development and production of the Bell Model 47, becoming the world’s first commercial helicopter in 1946.  By early afternoon, the weather greatly improved allowing the American Huey 369 to finally give helicopter rides.