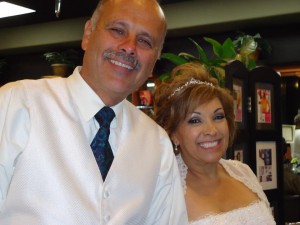 After confirmation, I regret to report the following news about my friend, VP, and co- star at the Bell 47 Helicopter Association & Whirlybirds Danny Rodriguez and his wife Teresa as well the other victims. God bless their families. will make a statement later, right now I will attach the following news report I received. President Joey Rhodes

A family member identified the four people that were killed when a plane crashed and caught fire after taking off from Corona Municipal Airport on Wednesday.

Eddie Rodriguez of La Mirada told KTLA on Thursday that he lost his brother Danny Rodriguez, sister-in-law Teresa and friend Paula Mitchell in the crash.

The plane’s owner, 85-year-old Joseph Zingali, was also on board and may have been at the controls although it is still unclear, Rodriguez said.

Authorities have yet identified the victims.

Danny Rodriguez served 27 years with the Los Angeles Police Department as a training officer, his brother said. He was an experienced pilot, comfortable in both fixed-wing aircraft and his own helicopter, according to Rodriquez.

“Well Danny himself … he was just a good guy,” Eddie Rodriguez said. “And he took care of me along with my wife when I had surgery a while back.”

Danny’s wife, Teresa, who also died in the crash, worked for the U.S. Postal Service for 30 years, according to Rodriguez.

“Marvelous woman … was kind to people, even strangers,” he said.

Eddie Rodriguez said he was supposed to be the fourth person on that flight but couldn’t make it. Teresa’s friend Paula Mitchell, also a veteran postal worker, took his place.

“You can lose a loved one at any time,” he said. “Love your family. Love your friends because they can fall away in a second.”

Around noon Wednesday, the single-engine aircraft was departing the airport, located at 1900 Aviation Drive, when it crashed at the end of the runway, according to the Corona Fire Department. Its 80-gallon fuel tank spilled and a brush fire ignited.

Firefighters knocked down the flames and kept the burn area to a quarter-acre, then discovered all four of the plane’s occupants had died.

Danny and Teresa Rodriguez Funeral Services.
Saturday February 1
Eulogy is at 9:30am at
Beatitudes of our Lord Church
13013 Santa Gertrudes Ave
La Mirada, CA. 90638…procession to Calvary Cemetery to follow, then return to church for reception.

B47HA encourages you to visit the B47HA approved “Bell 47″ Facebook page “BELL 47″ to interact with fellow members. To authenticate their names, just match with roster #. For Bell 47 sales, parts, and tech advice please consult one of our vendor members on our website in good standing.

The Bell 47 Helicopter Association has new exciting & informative images, articles, services, & divisions. However, our mission for our members remains the same – to preserve & protect the legacy of the original Bell 47 helicopter.

We encourage members to renew their memberships and support this important mission.