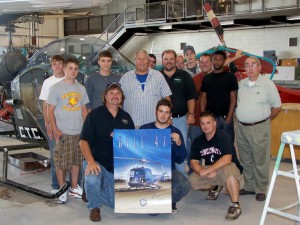 CINCINNATI STATE AVIATION COLLEGE Instructors Wright and Schmidt gathered their students to spend time with President Joey Rhodes and Maintenance Chief Neal Toler. Rhodes autographed and presented a 1957 Bell 47 J poster to the class for display. The school has two Bell 47s. “One actually runs!” explained fellow Bell 47 G2 owner and hangar neighbor James Faddis who introduced Rhodes and Toler. As Rhodes shares with one student named Ben (adjusting the sign pic), after the young man stated his desire to become an A&P or commercial helicopter pilot, “Don’t be surprised if our paths cross again.” Rhodes was referencing his remark to the many times at conventions and expos he has visited with past students he had spoke to over his 41 year aviation career and how many have shared with him their career successes. Rhodes stated, “B47HA’s singular goal is to promote the 47 and it’s legacy…to do that effectively with lasting results – we must include future generations.”