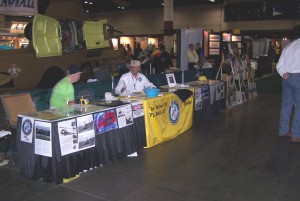 Orlando proved to be the right place for B47HA to be.

Furnished with an excellent spot by Bell Helicopter in front of a Cobra made the B47HA exhibit a “must stop” for Heli-Expo visitors.

Signing autographs from 11a to 4p to non stop crowds three days were B47HA’s spokesmen “The Whirlybirds.” Many vendors were amazed at the appeal of the B47HA celebrities. Rhodes stated, “the image we present to members and their families is that the Bell 47 community is a family because of the legacy we have been entrusted to preserve, protect, and promote the Bell 47. When we show an interest in their kids is when we see people who have been standing off to the side come over and tell us their Bell 47 story. We always are thrilled to see a parent who is a Bell 47 pilot or mechanic join B47HA. At this show I noticed that we had more interest than ever in the vision to manufacture a NEW Bell 47!”

On hand was maintenance chief & head funny man Neal Toler to address technical concerns. Operators Kevin Rattey & John Ryan helped out to discuss specific Bell 47 flight questions. Mark Hrutkay and Robert Horner helped with the show also. Rhodes was pleased to be with many different international members such as Volker Grasberger of Germany, Erik Busse of Belgium, and Tom Jarlinge of Sweden. Special thanks to the Hertelendys of HAC, Tal Kennedy, Guillermo Carabajel, Scott Churchhill, and Doug Kitzmiller for coming by. Museum owner Dan Haynes was also present with good news on their progress at Pidgeon Forge, TN. Special thanks to Bill Shrum of Tamaroa, IL. for donating a display Bell 47 model to the association – to which Toler took into immediate protective custody.

President Joey Rhodes stated, “this was an important venue for B47HA. Our meetings with BHT and insurance execs addressed many issues in our mutual interests.” Rhodes spoke to HAI Affiliates at a special conference held Saturday. His main points were the purpose and focus of B47HA to preserve, protect, and promote the Bell 47.

President Rhodes and the exec board met to discuss member disciplinary issues, positive finances, favorable CPA & Tax reports, and future public relation plans with the Larry Bell Museum in Mentone, IN. Rhodes reported on the recent roster update and reported that he was pleased that all members on the roster are in good standing at this time.