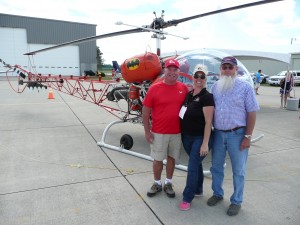 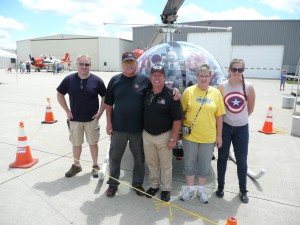 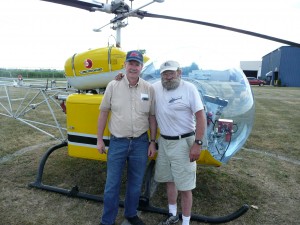 It was a great weekend at the fifth annual Rotors’n Ribs Fly-In Event held on July 15-16 at Goshen Municipal Airport in Goshen, IN.  Randy Sharkey, president of Indiana, Helicopters reported an estimated crowd of 5,000 over the two-day event, including at least 135 pilots attending and a total of 60 helicopters, four of which were Bell 47s. In fact, B47HA member Eugene Nock with his Batcopter (Bell 47G-3B1) was one of the featured stars of the air show along with his Batmobile. Other air show performers included the Sky Soldiers with their Bell AH-1 Cobra and two Bell UH-1 Hueys, and a 36,000 horsepower Shockwave Jet Truck which raced the Cobra attack helicopter at over 325 mph!  Other B47HA members who attended in addition to myself were LDB Aircraft Museum board representatives Marsha Scott, Heidi Orr, and Steve Rogers; Wayne Dennis who brought his Bell 47G-3B1 from Ohio; James Northup and Gary Dunn who flew down from Michigan in their Bell 47G-2; and Doug Kitzmiller who also came down with a pilot from Michigan in a Bell 47G-2. President Matt Zuccaro from the Helicopter Association International (HAI) held a well attended town meeting on Friday night and safety seminar on Saturday morning.  The weather was absolutely great for the event. The Rotors’n Ribs Fly-In is considered as being America’s largest helicopter air show. Randy Sharkey and Chuck Surack from Indiana Helicopters are looking forward to next year where they plan to provide another Rotors’n Ribs Fly-In event. Special Thanks to B47HA’s Jahn Luke for this article