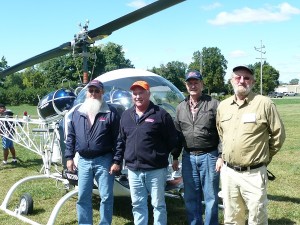 Although starting off a little chilly in the morning and windy at times in the afternoon, attendance was still good at the museum on Sep 6th with hundreds attending. For the Bell Aircraft Museum, it was their sixth  Rotors Over Mentone Fly-in event.  In honor of the Museum’s 40th Anniversary, former and current board members were recognized along with their families. The event also paid tribute to service women.  Guest speakers were former Air Force sergeant Rae Ann Panther of Bunker Hill, IN who served in tours of Korea, Vietnam, and Italy working law enforcement starting in the mid 1970s to early 1980s, and Eugenia Fulkerson from Warsaw, IN who served in Vietnam as one of the American Red Cross “Donut Dollies” in the late 1960s. Other female veterans were in attendance and recognized.  Huey helicopter rides were again offered by American Huey 369.

We were happy that the crew of James Northup and Gary Dunn came down from Michigan in their Bell 47G-2. The aircraft looked great.  BH47HA member Jim and Gary were able to share about the Bell 47 to a number of folks who wanted to get a close up look.  With next year being the 70th anniversary of the first commercial helicopter, the Bell 47, the museum is considering honoring the Model 47 once again at next year’s event.  Regards, Jahn Luke